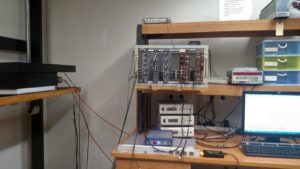 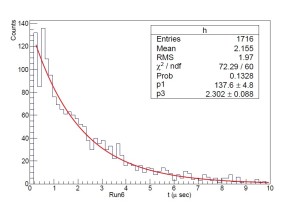 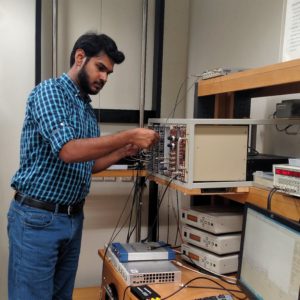 Cosmic ray muons are produced in the upper atmosphere and reach the earth. They are heavier than electrons but elementary. They have a finite lifetime of 2.2 microseconds and travel at close to the speed of light. They are not only elementary particles that attract the interest of physicist at large particle accelerators including the compact muon solenoid (CMS) experiment at CERN, but have recently been explore for climate studies and archaeology as well.

In the Physlab, our advanced lab students conduct an experiment which measures the lifetimes of muons using plastic scintillators and photomultiplier tubes (PMTs). These lifetime measurements have been improved by incoming undergraduate student from the Habib University, Muzammil Abbasi. A presentation describing his work can be viewed here. Here is a video log of his work too.

Recently, we have made several original contributions to the tools that are necessary for compact, accurate and innovative measurements of muon’s properties. For example, this webpage describes details of a simulator for muon tracking and scintillation modeling as well as an FPGA implementation of a time-to-digital converter (TDC).

In fact, the implementation was started by a visiting student from NUST’s EME, Sultan Abdul Wadood who is now pursuing his PhD at the University of Rochester. He completed his final year project in our lab and produced this thesis. Details of our FPGA implementation are under review with the Review of Scientific Instruments and the manuscript will be shared here soon.

Going further down the memory lane, Uzair Abdul Latif, made the first attempt of measuring muon speeds with fractionating discriminators and nuclear instrument modules. His work can be seen here.

Histograms of time-of-flight measurements fitted to an asymmetric Laplace distribution convolved with Guassian noise is shown below. 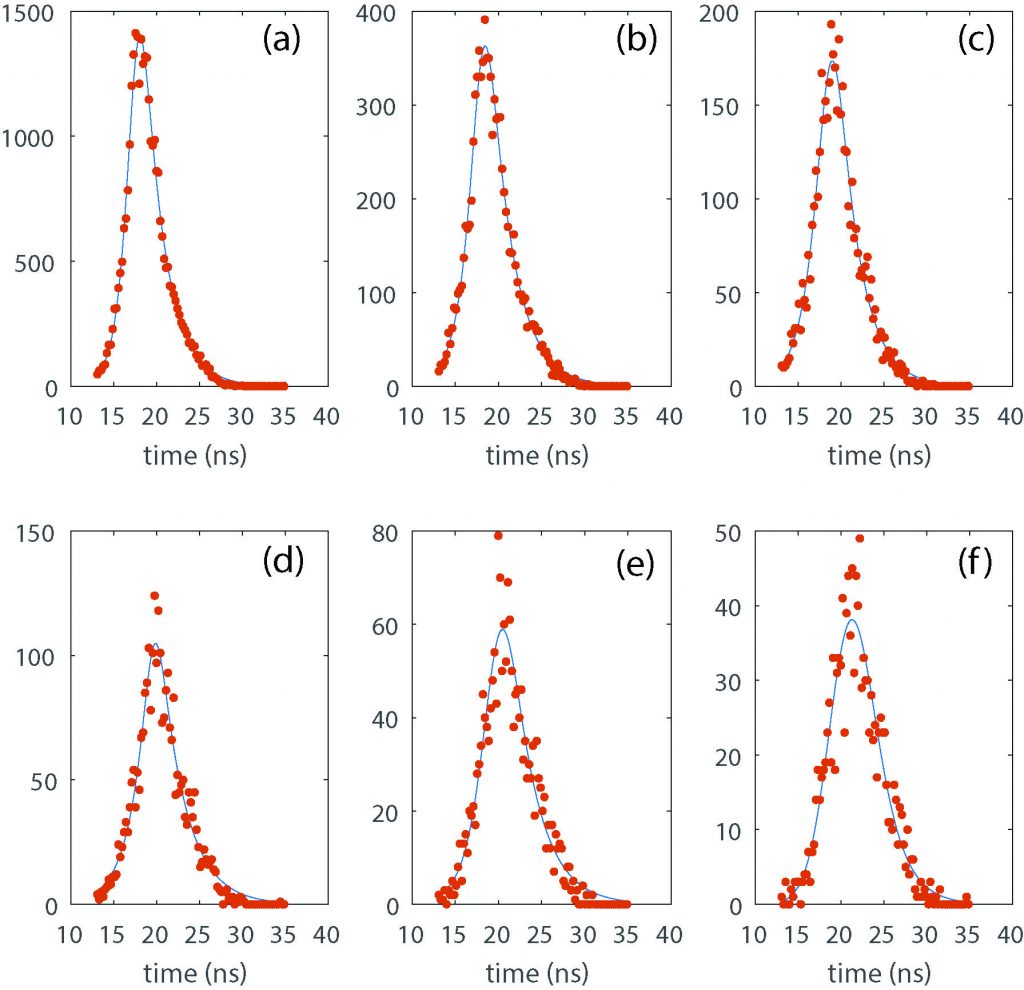 This software tracks the trajectories of muons in air and as they pass through a pair of scintillators. These scintillators flash with photons and the photons trigger electronic signals in photomultiplier tubes. The software allows to extract timing information of these events. Here we describe the installation and usage of the software.

The PhysLab Muon Simulator can be used to simulate a shower of cosmic ray muons on a set of rectangular scintillators for analyzing their transmission speed and some other important aspect of the process. The simulator provides a graphical user interface written in Microsoft Visual C Sharp for a partly Matlab based algorithm.

Make sure that the computer has a working installation of Matlab 2015b and .Net Framework 4.5.2. Download the simulator from https://bit.ly/physlab_muon_sim, extract and run the main executable named “MuonSimulation.exe” placed under “MuonSimulation\MuonSimulation\bin\Debug”. Most elements of the GUI are programmed with self-popping tooltips which means that hovering the mouse cursor over them for more than half a second will show a balloon tip about the usage of the respective element. With the help of the self-popping tip balloons, most of the simulation becomes self-explanatory. Some of the significance and usage of some important elements shown in Figure 1 will now be explained. 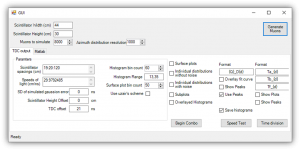 The top section first generates the specified number of Muons on a scintillator of specified dimensions. The simulation assumes a configuration of the scintillators defined in Figure 2. 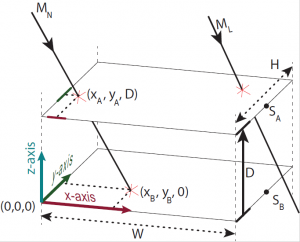 An illustration of the geometric configuration assumed by the simulator for calculating the transmission speed. Two scintillators of dimensions WxH placed parallel to the horizontal plane right above each other at a distance of DA. Each scintillator is equipped with a PMT placed at (W, H/2, 0) and (W, H/2, D) respectively with reference to the shown Cartesian coordinate system. A muon MN is shown to be striking the upper scintillator at a point (XA, YA, D) and the lower scintillator at (XB, YB, 0) after passing through the upper scintillator. The photons generated by the interaction of the muon and the scintillators will travel straight paths to the respective PMT tubes in order to get detected.

The simulation can be run for any number of scintillator spacings and any number of transmission speed specified in the “Parameters” group of the “TDC output” section. These values can be entered into comma-separated ranges. Some valid examples are:

Some other values that the simulator allows to customize will now be listed:

Associated with every combination of speed, spacing, and selected test, some shareable Matlab variables are produced which can be further investigated in Matlab. These variables can be viewed and exported in the “Matlab” section of the simulator. Since the same process is run multiple times with different starting parameters, the application uses a systematic way for the naming of these variables. Each test result variable name is defined as a format that includes programmable keys that guide the simulator what symbols to use in replacement. For example, each run of speed test produces three quantities, named ToF, histcenters and bincounts. The specified naming format can contain keys {Q}, {d}, and {v} which will be replaced by the name of the quantity, spacing, and assumed speed, respectively. The usage can be more clearly understood by simply running the simulator with some preset parameters.

The simulator provides multiple tests, the most significant of which is the speed test. This test is designed to simulate the time of flight of muons between multiple scintillator spacing and multiple assumed transmission speeds. To run this test,

The simulator can also be told to save the histograms of the TDC results which will produce variables with names according to the defend naming format.

To change the number of muons in the simulation, the simulator must be restarted.

Deployment of the TDC code on the FPGA

We have also implemented a time-do-digital converter (TDC) on an FPGA board. The code allows to measure speeds, fluxes and lifetimes.

The software required for the deployment of the TDC are free of cost but some import conditions may apply for the download.

The source code contains a pre-compiled .bit file that can be used to directly configure a Digilent Genesys board, however, if one needs to modify certain aspects of the design, or an FPGA other than Xilinx Virtex-5 LX50T, the following steps would be needed. Please note that once configured, the FPGA retains the configuration in its flash and will be ready to work after power reset without needing to be re-configured. 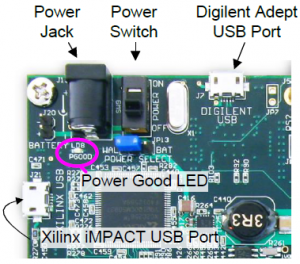 Figure 2: Main parts of the Digilent Genesys board.

To physically connect the TDC with the computer for communication, a serial-USB bridge is needed. This can be accomplished using either of the following devices:

Each USB-serial bridge provides a pair of Rx/Tx pins similar to the ones found on the FPGA. The Tx and Rx pins on the FPGA can be changed using the user configuration file, config01.ucf in the Xilinx ISE. By default, Rx is set to pin 10 on Genesys port J, and Tx to pin 2. To connect, the FPGA with the USB-serial bridge, the “Tx” pin of one end goes to the “Rx” pin of the other and the ground pins need to be connected. Once the USB drivers for the selected USB-serial bridge are installed and the connections are made, the TDC is ready to be connected to a computer utility that can communicate with the TDC.

Once the FPGA is configured and connected using the USB-serial bridge to the PC, all of its functionalities can be accessed using the Matlab command-line interface for the TDC. To explain the usage of the TDC, we take an example of measurement of the lifetime of Muons using a setup explained in https://bit.ly/3fx58HI. The experiment requires the TDC to measure the time between two pulses. The first pulse is named AB, which is an AND output of two signals, A and B. B2 is a signal representing the decay of a Muon causing the signal AB. C may also be used as a veto to reduce false positives which would mean that any signal on C will abort the measurement process. However, in this example, no veto will be used.

All three signals, A, B, and C are first passed through a NIM discriminator which produces a NIM output of -1.6V. This output is passed through individual high speed inverting amplifiers to get an output of 3.3V compatible with the FPGA. These signals are now fed to the FPGA on any three pins of the user ports JA, JB, JC or JD on the Genesys board.

Browse to the TDC interface directory which contains SampleCode.m file containing the code for the example under discussion. Once an understanding of the actual experiment has been developed, the code can easily be understood with the help of in-line comments. Summarily, the code first initializes a DataLink object to communicate to the TDC. It then configures the TDC to behave in the way required for this experiment and initializes an automatic timed process to record the time measurements of the TDC.