The following are the goals of the SSE Physics Lab:
1. Preparing an institutional and national platform for student-driven experimental research in physics.
2. Indigenous development of experiments for the laboratory and demonstrations for the classroom environment.
3. Training SSE students in world class experimental physics through required and optional lab courses.
4. Sharing expertise, resources and training in physics education with other institutions throughout the country and region. 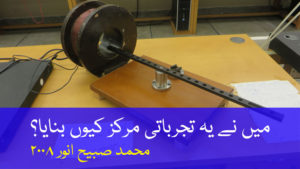 The lab course was offered as a first year B.S. level course in Experimental Physics to all the undergraduate students who could later choose to become electrical engineers, computer scientists, mathematicians, chemists, biologists or physicists. The contents of the lab included the fundamentals of diverse topics in physics, such as electronic circuits, lasers, heat transfer, thermodynamics, radioactivity, vibrations, rotational mechanics and data acquisition. The materialization, however, was not easy, given the diversity of the underlying physics and our insistence on cutting costs and promoting self-dependency.