Developing Labs in Developing Countries
Just as experience begins with sense perception, real understanding of science begins with experiments. This makes the role of laboratories very crucial in the field of science education. This also means that the task of designing, constructing, setting up and maintaining suitably equipped laboratories is an undeniable constituent of the cement that holds the edifice of science together and serves to erect it even higher.

To set up a lab according to the pedagogical needs of our time is indeed a laborious project. That is particularly more so in underdeveloped developing countries like Pakistan, where the financial and accessibility-to-market constraints aggravate the tenacity of a very slowly developing science-education scenario. The reasons for this exceedingly slow progress in the field of experimental science are several and various. Education, as a whole, remains the most unattended sector in the policy-making circles of the country. Because of this, very limited funds flow into the education system, and an even smaller fraction into development of education infrastructure. As a result, very few opportunities arise to train the human resource needed to take the step in the direction of locally empowered ingenuity, which is the key towards real paradigm-changing education. However, more than it is tedious it is indisputably necessary and rewarding, in the long run. Only by developing up-to-date and state-of-the-art laboratories, can we inspire the spirit of experimentation and genuine research among the growing generations, which in turn is the only way to set the trend for real scientific progress, industrial development and socio-economic prosperity in a country. Given the payback, to take the task of setting up one such benchmark lab is worth the trouble.

The PhysLab Project
The venture of developing a modern physics lab at LUMS School of Science and Engineering started in 2007 as a part of a greater project of setting up a world class Science and Engineering School in Pakistan that could compete with the international standards of instruction and research. PhysLab was to be offered as a freshman level course in Experimental Physics to all the undergraduate students who could later choose to be Engineers, Computer Scientists, Mathematicians, Chemists, Biologists or Physicists. The contents of the lab were selected to include the fundamentals of the fields that the students can later choose from: from Electrical and Electronic circuits to Lasers, thermodynamics and data acquisition using computers. The materialization of this design, however, was not going to be easy, given the expanse of the scope that this course in experimental science aimed to cover—more so when the path chosen to get to this aim was of self-dependency and indigenous craftsmanship as much as possible.

The PhysLab Workshop
The very first thing to take on was to accumulate a facility that will be used to develop the parts and equipment required for the lab. For this purpose, a 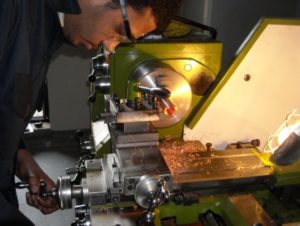 workshop was set up inside the Physics department. This workshop initially comprised of basic mechanical tools and a made-in-Pakistan lathe machine. This enabled manufacturing of simple mechanical parts required for the apparatuses. Metal housings, parts made of steel, aluminum and brass, and metal fixtures could be made inside the workshop. For this purpose, everyone among PhysLab staff had to train one’s self on the use of instruments at hand. Other basic tools, such as solder irons, were also acquired in order to be able to manufacture simple electronic circuits. Later, as the funds allowed, a PCB etching machine and a CNC Lathe were added to the facility. This allowed for production of precision mechanical parts and delicate electronic printed circuit boards and helped expand the research prospects for the students and several active research groups. The workshop facility of PhysLab now provides its skills and services to others departments of the School as well. Moreover, the workshop is also used as a training facility from time to time to help students learn and value the skills of handiwork.

Hunt for the Raw Materials
Manufacturing has to begin with raw materials. Raw material required for the production of parts and equipment for scientific experimentation is not readily available in the markets of a country where this mode of manufacturing is not the vogue. To look for and find out the needed materials and components proved to be a difficult task. Despite the hurdles, the option of importing parts from outside the country was used only as the last resort.

On the positive side, the difficulty of the situation inspired adaptability and ingenuity. Most of the home-made apparatuses were made from cheap and readily available materials, such as plexi-glass, aluminum, wood, steel etc. It was, however, made sure that the simplicity of the developed parts does not compromise the objectives of the experiments. For this purpose an appropriate organization of the conceptual content of the experiments was needed. 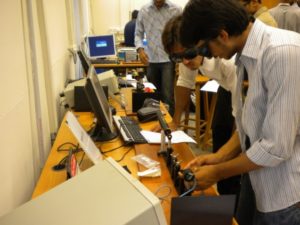 After a hard work of more than a year that included revisions of the content of experiments, hardware improvements and corrections, and a scrupulous effort in writing the laboratory manuals for the students, PhysLab was ready to offer a richly organized lineup of freshman experiments in 2008. The apparatuses for most of the experiments were designed in house, or at least a part of them was manufactured locally. Experiments on Magnetic Phase Transitions, Latent heat of Vaporization, Heat Transfer and Newton’s law of cooling, Vibrations on a string and Resonance and Thermodynamics of a Heat Engine are elegant examples of economical and in-house designs of teaching experiments. A list of these experiments along with their lab manuals, recommended readings and and sample results can be found on PhysLab website for the use of those who share the same dream. See the list of experiments here.

Writing the student manuals that followed a conversational 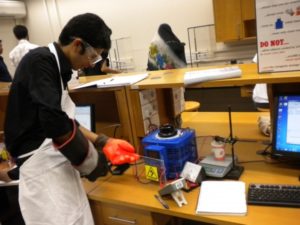 style of instruction was in itself a new and enchanting experience. It helped to state the objectives and aims of experiments being done in the lab more clearly and liberally: completion of experimental tasks was not important as long as the students absorb the practical concepts of the subject.

In 2010, the junior lab was established, again vastly relying on indigenous research and development. Experiments span a variety of concepts, from heat waves and nonlinear dynamics to magneto-optics and X-ray fluorescence. Experiments on X-ray fluorescence, nonlinear dynamics, heat waves, Faraday’s effect and Superconducting Quantum Interference Devices (SQUID’s) are a clear indication of the indigenous potential for research and contribution to science education. 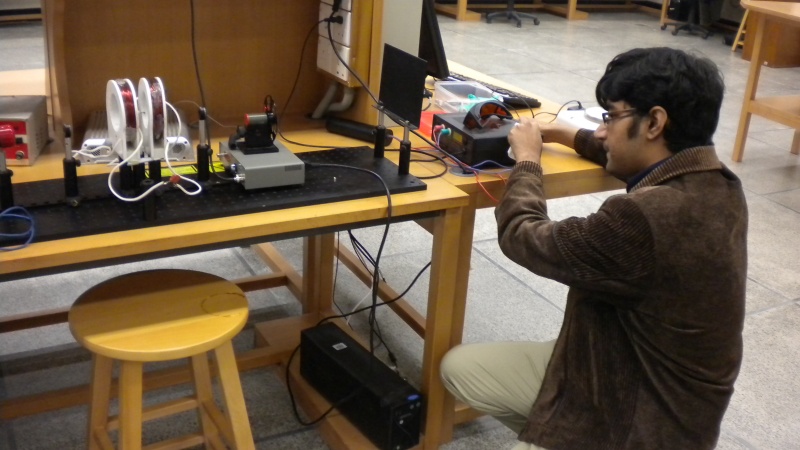 The whole list of experiments offered in the junior lab is available on the website along with the supplementary material in the form of sample results and further readings. In this way, the contribution of PhysLab to experimental physics is also open for others to benefit. 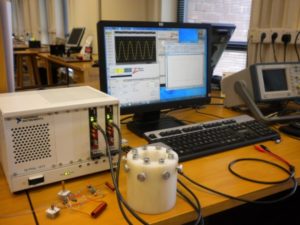 growing even greener leaves of more sophisticated research.In this respect, with the passage of time, several research labs have been set up to carry out experimental investigations that work both to further the frontiers of research at physics and to assist the teaching labs, especially the Senior lab that demands a great deal of original researchable ideas and projects. Today, several research labs, such as Optics lab and solid state lab, are functioning at the department and have been developed and maintained by the staff from the experimental physics section of the department. 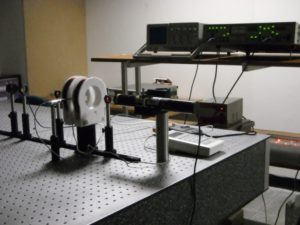 Various research groups at PhysLab are busy in research and indigenous development in the country. Magneto-optics group, Spin physics group, Solid state physics group, Spin Physics group and Lasers group are the prominent ones, with projects going on in Atomic force microscopy, magneto-optics, super-capacitors, electro-deposition films, spin caloritronics and various others. Several original research projects have been carried out at the research facilities of PhysLab under the supervision of Dr. Sabieh Anwar, Chair Physics department.

Going Commercial
On the way to the goal of locally powered development and self-dependency a milestone was achieved when, in 2010, PhysLab set up the Physics Lab at Institute of Space Technology (IST), Islamabad. Most of the locally manufactured apparatuses were provided to IST. It brought valuable revenue that helped hasten the pace of the journey towards the dream that started with PhysLab. Again in 2011, the experiments developed at PhysLab were sold to Ghulam Ishaq Khan Institute (GIKI) for their physics laboratory. This clearly indicates a growing respect for in-house and indigenous development activity in the country. 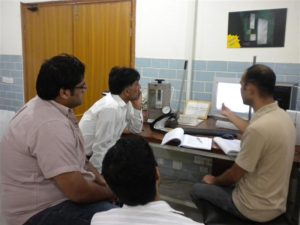 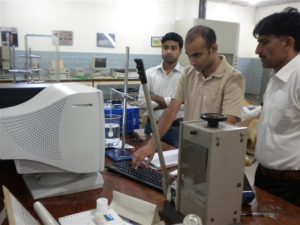 In a relatively short time of 4 years, PhysLab has shown a great potential for changing the direction of education in Pakistan from information-based to knowledge-based. Contracts with other educational institutions indicate that the efforts of the people at PhysLab are being recognized, which is surely promising. In Pakistan, PhysLab has surely marked a major change of trend in how institutions are established and grown.