Home \
PHYSICS FOR A CHANGE:

THE EXPERIMENTAL PHYSICS LAB at the LAHORE UNIVERSITY OF MANAGEMENT SCIENCES 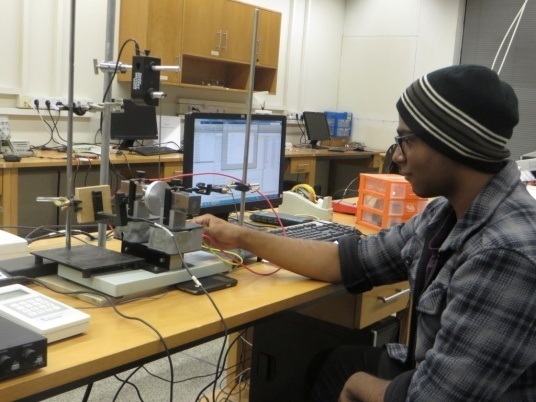 The Physics practical courses at the LUMS School of Science and Engineering (SSE) provide an opportunity for students to learn the basic skills and traits of the experimental paradigm. The Physics lab (PhysLab as it is called) first opened its doors to its first batch of 150 students in Fall 2008. Currently, about 1200 students have completed their introductory physics course. Comprising experiments from basic kinematics to the more state-of-the art experiments on superconducting quantum interference devices, the lab was a definite first in the country. It was set up by Associate Professor of Physics, Dr. Sabieh Anwar along with a team of research and support staff.

Each year the lab course runs two major courses: an introductory course for about >250 students and an advanced lab course with almost ten undergraduate and graduate students. 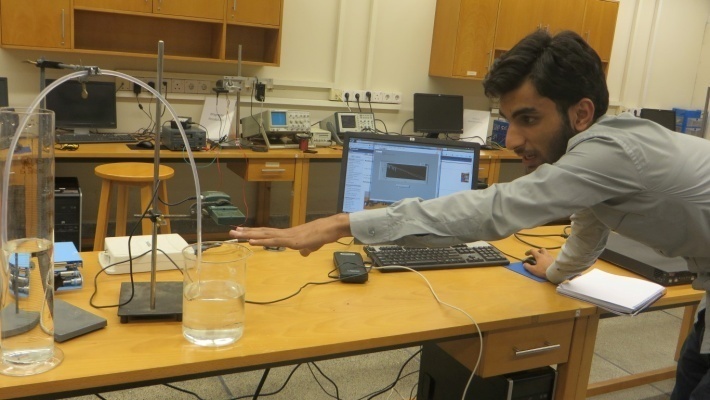 Qamar uses an ultrasonic sensor to study the dynamics of water flow in a siphon.

Modern experiments employ industry-standard technologies and softwares such as Matlab and Labview for preparing students for industrial enterprises. The emphasis on data analysis, statistical computation, presentation and technical writing is immense, while at the same time, students are offered the optional track of the Physics studio, a design kitchen where students  propose implementing an original idea from their knowledge of physics; and cycle through the complete run of conception, design, execution and analysis of the experiment. The Studio offers a fresh creative boost and refreshing departure from the ken of our observantly written laboratory manuals. There are other several exciting components of these courses such as exposure to modern workshop practice, data interfacing, data analysis, curve fitting, best estimates and uncertainties, safety protocols, the art of maintaining laboratory diaries, image and video based experimentation, sensor interfacing, arduinos, signal conditioning and recently, the use of the now ubiquitous smart phones. The advanced lab work entails a rigorous mathematical treatment of uncertainty quantification and its presentation, conforming to the guide to the expression of uncertainties (GUM) standard proposed by the Bureau International des Poids et Mesures (BIPM).

The experiments span a diverse spectrum of concepts from 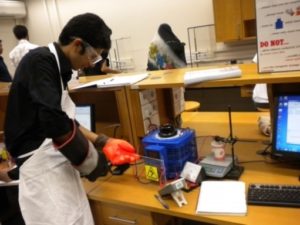 A student measures the latent heat for vaporizing nitrogen.

physics. The experiments are generally divided thematically, on the principle of principle, rather than the principle of phenomenon. For example, energy conservation is used to determine the Curie point of a ferromagnet, to measure the moment of inertia of a spinning wheel, the profile of a crater formed by impact from a lab-scale ‘meteorite’, the temperature of a hot glass bulb filament  or to determine the heat of vaporization of liquid nitrogen. Students learn about frequency transformation in thermal diffusive waves, period bifurcations and Poincare maps in electric circuits and chaotic pendulums. Furthermore, the laboratory manuals generally follow a Socratic approach by posing open ended questions and planned failures, inviting students to intimately discuss with demonstrators and explore new directions.

Several ideas have now been published in European Journal of Physics and American Journal of Physics, including some as editor’s favorites, as well as at international conferences on physics education. The Advanced Labs Project titled ‘Compadre’ endorsed by the American Association of Physics Teachers also features some of this work on their online compendiums. The work is now poised to be converted into a book on Modern Practices in the Physics Laboratory.

The Physlab maintains an active program of short-term placements of two to three months long summer internships for students both in our university and outside. A large number of researchers from across the country benefit from our research and fabrication facilities, augmented by modern manufacturing and design tools housed in our well equipped workshops. Besides, there are the research students working in these laboratories for their undergraduate and graduate dissertations irrespective of their area of specialization. In this sense, this effort has transformed a truly multi-disciplinary, no-boundaries endeavor! The regular open houses and teacher training workshops, dubbed the National Lab Immersion Programs have regularly taken place since its inception in 2008 through 2014, so far in Lahore and Sukkur. These programs are all aimed to the disseminating of best practices in exprimental physics to the wider academic community.

In 2009, The PhysLab also embarked on an initiative quite rare by all standards in the country: a university sharing its material and intellectual resources through a service contract. Under this project, we have now developed and built assorted experiments for four Universities inside Pakistan. This entrepreneurship has generated not only valuable revenue, but the resource sharing is set to germinate seeds of world-class education in physics experimentation throughout Pakistan. It can be hoped that apart from highlighting immense possibilities for meaningful academic collaborations between the country’s Universities, there are economic and manpower benefits that can be derived from such initiatives. For example, could such an exercise spiral a new wave of technology development, glimpses of which we see around the developing world, though at much higher costs and financial inputs? Who knows!

What sets us apart from other teaching laboratories after all?

In the conventional scheme of affairs, our Universities in Pakistan buy apparatuses. To an extent, we also buy apparatuses, but we also build a much larger variety of experiments out of these, develop write laboratory literature, develop computer programs, prepare blueprints and models for replication by the teacher community, and organize all this material freely on a public-facing website that attracts around 200,000 visitors every year.

An add-on to a Van de Graaf generator helps explain the expulsion of electric fields from inside metals.

This is called capacity. For example, the home-grown capacity has enabled the facilitation of Physics and sister departments in the blossoming of new research facilities, the building of equipment that is extremely expensive and cumbersome to import, save money, and bring in more resources. New experiments can be made on demand by tailoring existing resources and a highly reconfigurable laboratory has come into life! An elaborate activity is the building of on-demand in-class demonstrations that are meant to bring physics closer to reality. This is what I call ‘physics for a change’!

In the near future, we have several projects to keep us busy. First, we would like to deploy our new dedicated teaching laboratories in optics and quantum mechanics. The spadework is almost complete and the next step is the commissioning. Second, is the conversion of our laboratory’s scientific literature into a formal textbook. There is dearth of material on the subject and a great desire to see books on experimental practices that (a) discuss modern, cheap gadgets and tools that are becoming increasingly popular in the laboratory practice such as arduinos, sound cards, webcams, smartphones and sensors imbedded therein, temperature controllers,  lock-in amplifiers for small signal detection; (b) guides for making visually appealing and poignant classroom demonstrations and (c) applying statistical techniques in the study of physical phenomena germane to the undergraduate level. Finally, we would like to see a gradual internationalization of our efforts: inviting students and teachers from around the region to participate in our activities; collaborations with physics education consortiums, magazines and journals and organization of an international workshop.

In the year 2015, we are planning on organizing the Fourth National Lab Immersion Program in late summers. This year, we would focus on a subset of experiments and will involve teachers of advanced laboratory courses. Our proposed experiments, all built in house, include:

2) Exploring nonlinear physics with a diode and magnetic pendulum

3) Phase portraits with a smartphone

4) Temperature oscillations inside metals with a periodic heating source

There is also great interest in organizing a competition on using the smart phone’s imbedded sensors for exploring a novel physical phenomenon. More discussion is underway on this.