Thermal and Electric Properties of a Light Bulb 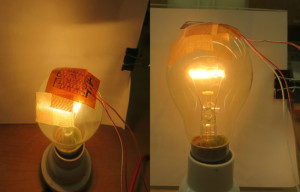 The aim of the investigation was to probe the electrical and thermal properties of a commercial incandescent light bulb and quantify its temperature using its resistance. The light bulb was also assessed if it behaves like a blackbody and thus follows the Stefan Boltzmann law, for its radiant power and temperature. A thermopile was used to measure the thermal energy emitted by the bulb’s surface, and this in turn was used to compare the transferred thermal power with the temperature of the filament and the bulb’s surface. The results showed that although the filament temperature and surface power do not correlate positively, comparison between surface power and temperature yields a relationship more consistent with Stefan-Boltzmann relationship.

Conservation on Linear Momentum on a Carrom Board